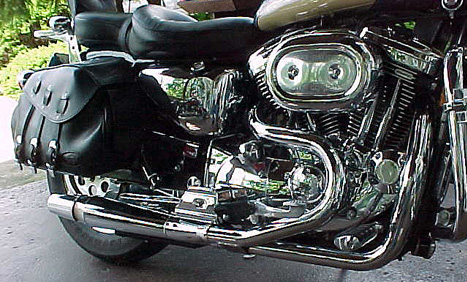 Why Thunderheader: As those who have been following my travails know, I have been spending a lot of time lately fine tuning my carb, and I became extremely frustrated by the stock headers’ crossover tube interfering with my access to the float bowl and idle mixture screw. Right before my trip to Bike Week 2000 in SC, I decided once and for all to change the exhaust system to something different which would finally grant me free access to the carb, while (hopefully) not sacrificing too much performance to the proven setup I had. I chose a 2 into 1 system mainly because of the advantage of having the noise projected out BEHIND me, rather than right under me as a staggered system would do – the drone of the motor does become annoying on long trips. Of course, the mid-range offered by a good 2 into 1 is also a plus. As it turns out, all of the 2 into 1 systems (except for the Thunderheader) which I found had an upsweep at the end of the pipe, which would negate the use of my HD B&S saddlebags if I swapped exhausts – this was not an option, so in effect I had only one choice. Since the Thunderheader had a good reputation anyway (it is THE best sounding pipe I have ever heard when used with the TC88 engine), I wasn’t too upset – although I would’ve liked to at least have some options, mainly Supertrapp or Vance and Hines Pro Pipe (if it went straight back, as on the BTs).

Installation: Absolutely pain-free. I was done in less than an hour, using the clearly written instructions included with the pipe. There were no surprises, and all required hardware (including new support bracket and 2 chrome heat shields) was included. As shown, the pipe does not interfere at all with my standard non-adjustable HD highway pegs. Note: I used the original snap rings and flanges from the stock headers to install the Thunderheader. Also, to prevent bluing or discoloration of the chrome headers, I did coat the inside of the pipes with black hi-temperature Plasti-Kote spray paint, per the instructions of a Rich Products rep and Thunderheader guru Gene Hubbs. While this seems to have worked on the front jug’s header, the rear jug’s header quickly discolored. Of course, this discoloration is covered by the heat shield, so it’s not an eyesore.

Jetting: Per the instructions, I did increase the size of my main jet, from 185 to 200. Usually, on anti-reversion systems such as Thunderheader, you have to reduce the size of your slow jet. I did not reduce the size of my 45 slow jet, however, because it was already on the lean side at 2.5 turns out. Instead, I simply leaned out the low-speed circuit by turning the CCP idle mixture screw in 1 turn, to 1.5 turns out total.

Turbulator: The Turbulator had to come out. Although it worked well with the previous exhaust system, it proved to be a stumbling block while carb tuning for the Thunderheader. It produced a lean condition in the mid-range that was very difficult to cure, so I just removed it entirely. Problem solved.

Sound: Totally awesome! The engine now has a bassy, burbling idle and sounds as if it has grown 250cc or so – In fact, it sounds much like an amplified version of a TC88 with Harley’s “Touring Mufflers.” The idle is much quieter than old S/E slips, but it sounds much more menacing nevertheless. Above idle, the sound of the pipe is so dramatically different than S/E that I can hardly recognize my own engine anymore. It sounds totally aggressive, throaty, and – dare I say it – refined. My bike now sounds almost like a precision V-Twin performance machine (like Suzuki’s TL-series or a Ducati), rather than a loping, sloppy sounding Harley. It really transformed the character of the bike, and my attitude while riding it. I found myself ripping into corners and accelerating hard whenever possible – riding much less conservatively than before, because the engine actually seems to ENJOY it more. As an added bonus, when you let off the throttle, there is a distinctive, low gurgling sound – similar to what happens on bikes with drag pipes, but without the obnoxious barking overtones. And, as expected, since the exhaust’s opening is actually behind me now, the sound at cruising speed is a muted hum, and I can actually hear the engine’s operating sounds OVER the exhaust note. Quite enjoyable – the sound improvement far exceeded my expectations, which were high to begin with. 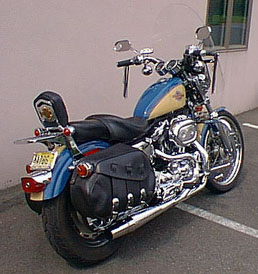 Sound Clips: Now you can listen for yourself! I took an old Radio Shack recorder and put it 5 feet behind the bike, before and after the installation of the new pipe. The sound quality of the clips is a very poor indicator of the true difference in tone, but it’s better than nothing. You will hear idle, then 2,000 rpm, then 3,000 rpm, then 4,000 rpm, and then back to idle.

Click HERE for a sound clip of the new 2 into 1 Thunderheader setup.

Performance: I expected a significant loss of low-end, this being a 2 into 1. Likewise, I expected a boost in mid-range. Seat of the pants, I detected absolutely no loss in the low end. Actually, it feels much the same, up to 2,500 rpm. From there, there is a really noticeable change in the engine’s delivery. It pulls very hard, very fast, and (gasp) very smoothly! The motor seems to have gotten a jolt of caffeine in the mid-range, and it screams up to redline almost with the willingness of a Japanese 4-cylinder motor. Can it be that this pipe has replaced the familiar lugging, overgrown Briggs and Stratton characteristics of the Sportster mill with a newfound angry beast of an engine? After my test rides, the answer seems to be a resounding YES!

Downsides?: There is only one so far – The pipe’s very low position, which limits cornering clearance quite a bit on the right side. 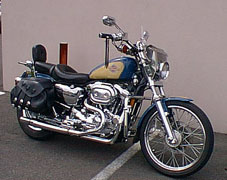 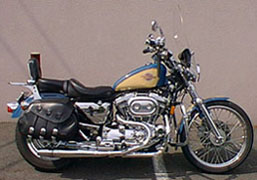 Kuryakyn Rainbow Strobe as seen at dusk - 7/99 Seeing and Being... read more