Synopsis: Where you spend your money on motorcycle parts and accessories matters, and price should not be the only consideration in your buying decision. For the industry to thrive and for us customers to be well served, we must patronize our local independent motorcycle shops – that is, those non-affiliated shops which still maintain an atmosphere that is primarily focused on motorcycles and the sport of motorcycling as a whole. This vital focus has most certainly been lost at the Harley-Davidson boutiques, while the impersonal internet based discount warehouses usually offer a total lack of often precious value-added services, in exchange for only modest price savings. Such value-added services can only be conveniently obtained at your local indy!

Cycle of Buying – Where From and For How Much?: When I first bought my Sportster in 1998 at the ripe old age of 22, I began buying accessories for it immediately. In fact, I had over $350.00 worth of goodies on the garage floor, waiting to be bolted on, before the bike even arrived. At first, like most other newbies, I was buying mainly from my local Harley-Davidson dealership. Along the way, I discovered the internet vendors, including the discount warehouses, and independent local motorcycle shops as well.

For the next few years, after having the inevitable bad experiences at the local Harley shop, I decided that if I was going to do my own work, I was going to buy my parts from whoever sold them to me at the lowest price. That wasn’t just one factor in my buying decisions – it was the only factor.

But now, after over five years of observing the scene, I have come to realize the error of this buying philosophy. That is – there is in fact more to an intelligent buying decision than just price. The good consumer who cares about the industry as a whole must also place an emphasis on the value-added services which the local vendor can provide, or else he risks losing any professional help he has nearby. 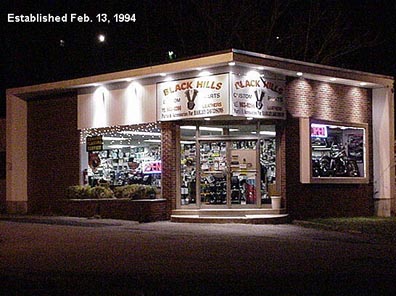 When Independents Close Down: I realized this in 2002 when a local indy shop owner whom I befriended threw in the towel on his shop, due to slowing business. He went from full time work to only part time, and eventually closed the doors altogether in the spring of 2002. When I inquired as to why, he explained that although labor (work) remained fairly constant, parts sales had dropped dramatically as people began buying from online discount warehouses. Admittedly, I was doing the same at the time. Upon studying at his prices closely, I quickly realized that I as a regular consumer could often buy parts for less than he as a dealer was paying for them, simply by patronizing online discount warehouses directly. Something about that state of affairs seemed out of kilter….

Nevertheless, being a DIY type, I initially saw no reason to spend slightly more for the same part by patronizing the local shop. Well, I was wrong. When guys like the aforementioned indy shop owner close their doors, we all lose as motorcyclists. Why? Because those are the guys that can help us get the most out of those parts, after they sell them to us. This hit home when I needed some help in the late spring of 2002: With the local indy shop gone, getting the help I needed was much more of a struggle in terms of time, and eventually, money. Sometimes, you need a competent professional set of eyes and hands to help you – no discount warehouse phone operator is going to suffice in that situation!

But if local shops keep closing down, all we’ll have is a bunch of non-riding phone operators at the warehouses to help us with our applications – and you know they might as well be selling pantyhose as MC parts, because they usually don’t know much about either.

The Lesson of Mr. John Pratt and PowerCycle: Years ago, there used to be a gentleman named John Pratt on the XL List. He passed away on May 20, 2001, but the lesson he taught us is useful here. After years of reading about bad dealer experiences and posting valuable technical advice online, he announced that he was starting his own customer-centric small independent shop, “PowerCycle” in Ohio. Many on the XL List supported Mr. Pratt’s endeavor by buying from him, to help him get the business off the ground. Once PowerCycle was up and running, John was always effective in teaching us customers what life was like “on the other side of the counter.” I remember reading Mr. Pratt’s posts justifying his slightly higher prices with the value-added services he offered, and I was admittedly skeptical at first. Back then, in my zest for lowest price, I didn’t stop to think about how much Mr. Pratt’s time was worth – he was known to spend hours on the phone each day with customers, accommodating them in choosing which parts they needed for their individual or custom applications, and patiently helping them when installations didn’t go according to plan.

Mr. Pratt’s business was no doubt squeezed by the pricing pressures of discount warehouses, but as anyone who has ever had a problem finding or installing a part (and who hasn’t) knows, a knowledgeable person who can really help in such situations is certainly worth a few dollars here and there in the long run. Anyone who dealt with John Pratt on a customer level, myself included, can most definitely testify to this firsthand.

Learning From Experience: There’s an old proverb that says experience is the most difficult teacher, since it gives you the test first and the lesson afterward. Thus, from experience and the lessons I have learned after 5 years of riding and wrenching on my Sportster, I have come to modify my buying habits accordingly. Like many serious customers who expect good service, I have long ago abandoned Harley-Davidson dealerships. Those places have lost focus on the most important part of motorcycling, which is the motorcycle itself. For the most part, at least in my area, you’d be lucky to find a bike or two buried amongst the “Genuine” tacky clothing, embroidered toilet seats, dog outfits, Monopoly sets, Barbies, and such. The salesmen there are usually extremely arrogant, and aren’t well versed in the products themselves. My experience with the average Harley-Davidson dealer mechanic is that he’s barely qualified to change oil, not to mention provide guidance on a performance project.

Likewise, I have stopped trying to save every last penny by buying from online discount warehouses, unless I am positive that the installation is totally painless, and that the savings are very substantial. Even then, I will only buy from an online source with competent technical knowledge like Parts Direct or Cyborg Cycles, not from a discount warehouse.

Patronizing Indys: The best choice is to visit and buy from your local independent motorcycle shop. There, I’ve always found an atmosphere which is still focused on the bikes and not on the silly, distracting “lifestyle” trinkets. In my experiences, the independent mechanics are also much less pretentious than those at the Harley dealers, while usually being infinitely more knowledgeable, especially about performance parts and what combinations / configurations work well together. Finally, and of paramount importance, you can almost always deal directly with the owner of an independent shop: To me, the value of the honest pride in work and forthright attitude of the small business owner simply cannot be compared to dealing with the clueless counter clerks found in the boutiques, or the non-riding phone operators at the discount warehouses.

In Conclusion: Granted, your experiences may have differed from mine. You may never need any local help because of your superb skills as a mechanic, and, though the possibility is remote, you may even be one of the lucky few who is satisfied shopping at your local Harley-Davidson boutique. Regardless, the overall message is the same – in the long run, as a motorcycle parts and accessories consumer who values good service and the industry itself, it’s worth paying a little more for local value-added services.