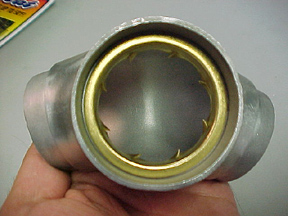 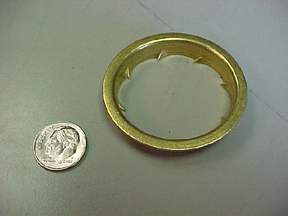 The Turbulator, alone and installed 5/00

Background: I met the inventor of the System II Turbulator at Bike Week 2000 in Myrtle Beach, SC. I was extremely skeptical of his claims that this simple, brass vortex fitting could significantly improve my throttle response or gas mileage. However, when my friend Dan (who rarely tweaks his Road King) bought one, I couldn’t resist. For the $20 it cost me, I figured it was a cheap experiment.

The Test: I successfully installed the Turbulator in less than 15 minutes. This part fits neatly in the throat of the intake manifold, and you simply slide the carburator onto the manifold as before once the Turbulator is pressed in. That’s it. As stated in the Mobil 1 Synthetic Oil Impressions page, Bike Week presented a great opportunity to test ride in a wide variety of conditions, from flat out on the highway to creeping along in parades.

Tuning the Turbulator: The Turbulator vendor warned me that the device would have a slight leaning effect on the air / fuel mixture, and instructed me to turn the idle adjustment screw out 1/2 turn. I did so, with no negative results. However, I did notice more pinging during top gear WOT acceleration than was present before the Turbulator was installed. This problem should be easily cured by either bumping my main jet up one size, or adjusting the clip on my Yost needle one step richer. I am waiting to do a final adjustment on my carb after I install some more accessories, at which time which I will richen the mixture as described.

The Bottom Line: I detected absolutely no seat-of-the-pants improvement in throttle response, acceleration, or overall engine manners. However, overall fuel economy did go up by approximately 10% in mixed driving. Amazingly, fuel economy for gentle highway cruising under 65 mph went up by almost 20%! In fact, I got almost 140 miles out of one tankful without hitting reserve! My bike was never so frugal, even when stock. It really surprised me, because I thought the Turbulator would be nothing but a gimmick. Essentially, this part will soon pay for itself in fuel savings and the convenience of being able to travel longer between stops – a necessity for me, as most of my riding partners have Big Twins with large tanks.

Overall: Not a bad deal for $20, especially considering how easy it is to install.

UPDATE 5/00: The Turbulator had to come out when my Thunderheader exhaust was installed. Although it worked well with the previous exhaust system, it proved to be a stumbling block while carb tuning for the Thunderheader. It produced a lean condition in the mid-range that proved very difficult to cure, so I just removed it entirely. Problem solved.

UPDATE 6/02: I am currently testing the turbulator again, this time with my current setup and a Nallin-modified CV40 intake manifold. I will post results here soon.

UPDATE 3/03: I successfully used the turbulator since last June. With the Mikuni carb, the fuel economy gains from using it were a little less than with the CV, but there was nevertheless a slight improvement – about 4% mixed cycle. Now, I’m switching over to a 42mm manifold which Brain Nallin modified to match my HSR42 – the turbulator is designed to fit in a stock 40mm manifold, so I’m removing it at this point.