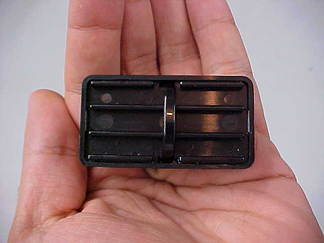 Background: The Green Light Trigger is a device designed to reduce an aggravating problem for motorcyclists – traffic lights that don’t sense our bikes, and stay red indefinitely until cars or trucks pull up behind us. This problem has been described in the American Motorcyclist magazine, as well as Motorcycle Consumer News. The Green Light Trigger website describes the problem as follows-

“Traffic signal sensors are essentially metal detectors buried in the road surface. These inductive loop sensors are easy to spot because they have a circular, square, or diamond-shaped saw cut in the pavement just before the intersection. They’re meant to pick up the presence of large masses of metal – like cars and trucks – sitting still over the detector loop. Most modern bikes don’t have enough inductive material in their frames to trip the sensor, and what they have tends to be oriented vertically above the loop (making it harder to sense) so we get stuck.”

The Green Light Trigger is basically a magnet in a black plastic casing, designed to mount to the bottom of the bike. The device is designed to set up a voltage signal in the inductive loop sensors under the road surface, so that the traffic light’s computer is “fooled” into thinking that large vehicles are present, leading to a green light.

Mounting: Very easy. The Trigger comes with a black tie wrap (as shown below) and small adhesive pad. I mounted it on the Sporty’s frame rail, on the kickstand side. It took less than 2 minutes, and it’s not visible when looking at the bike from a standing position. 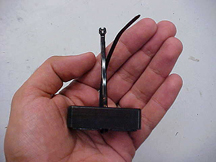 The Test: I used this device for three months, with reasonably good results, using a test set of six notoriously stubborn lights I encounter often. The Trigger did lead to consistently  improved green light times on four of the six lights, which I visited either very early or very late to avoid other traffic. To test the two lights that remained stubborn despite the Trigger, I drove the cage out to the same lights, again very early or very late to avoid traffic. With the cage, the same lights did turn green much more quickly than with the bike. Perhaps the Trigger simply wasn’t strong enough to set up a voltage signal in these two inductive loop sensors.

To test this theory, I purchased two extremely powerful “rare earth” magnets. These rare earth magnets, approximately 1″x0.5″x0.125″, were much more powerful magnets than the Trigger. I took the Trigger off and mounted the rare earth magnets under the bike (they just stick to the frame rails), and went for another three months. The rare earth magnets produced the basically same results, despite the fact that they were much more powerful magnets. The two stubborn lights remained so. However, after three months, the bare magnets began to show signs of corrosion, and scratched the frame paint where they were mounted from slight shifts in their positions. So, bare magnets are not an ideal solution.

Bottom Line: Though not a miracle cure-all, the Green Light Trigger did improve my odds of getting green lights at otherwise stubborn red lights. Given the low price of the device, it’s a worthwhile addition if stubborn red lights are an issue you encounter with regularity.