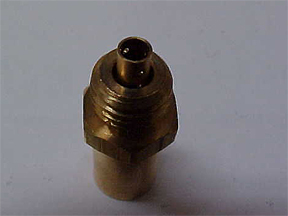 Background: I have done very little to the motor since my 6/26/01 dyno tune at Black Hills Custom Parts, following the 4/01 upgrade to the Nallin Stage II heads and Mikuni HSR42 Carb. The bike has performed flawlessly since then, but the urge to tinker with perfection reared its head as I pondered playing with the Mikuni. I decided to find out if the relatively simple swap of the Mikuni’s stock emulsion tube for a Yost Performance Tube made any difference. I must admit approaching this product with a  healthy dose of skepticism, given that many jet kits can be overpriced for the benefit they provide (90% of which can usually be obtained with simply rejetting). However, this kit was inexpensive and I decided to give it a shot anyway, despite my preconceived notions.

Components: As shown in the picture below, the Yost Performance Emulsion Tube differs from the stock Mikuni tube in that it has a protruding, perforated pipe at the top of it. An unexpected side benefit of the Yost Tube is that it is threaded to accept common variety Keihin CV jets, in place of Mikuni jets. CV jets are widely available at virtually all bike shops, while Mikuni jets are usually special order at Harley shops. I already had an abundant selection of CV jets on hand, so I set forth on the install. 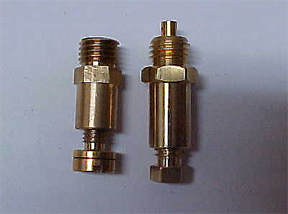 Installation: Took about as long as rejetting, with no surprises. Yost supplies the emulsion tube and 4 jets (165, 170, 175, and 180). After consulting with Bob Yost himself, we decided to use the smallest jet (#165) as a slightly richer alternative to my previous #160 Mikuni jet for baseline testing. Yost also supplies a deeper drain plug with new o-ring, as shown below. No other changes were made to the carb. 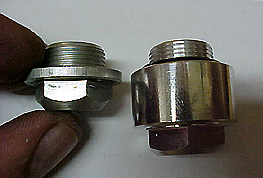 The Test:I ran the bike for 500 miles in various conditions for the test, to observe any changes in power delivery or fuel economy. I do not have easy access to a dyno given my time constraints these days (full time job, grad school, new baby, new house), so I did some old-school testing by simply doing some before and after runs, and then comparing times and feel.

The Results: To the serious performance purist, there is no substitute for a dyno. However, I’ve become pretty decent at estimating gains and different nuances in power delivery over the years, and despite my initial skepticism, I must say there was a definite positive difference after the Yost product was installed. Under 3,000 rpms, everything felt pretty similar. However, the engine definitely had a little more “snap” to it above 3,000 rpm, and felt especially more powerful when pulling hard in high gear. This was confirmed in my top-gear roll-on testing, in which I used identical markers (a little over 1/4 mile apart) on a local highway to measure speed and time at WOT in 5th gear, starting at 60mph. The addition of the tube reduced time by about 2 seconds, and exit speed rose by a little over 5 mph. Hardly scientific, I know, but I would venture to guess that on a dyno, one would see 2-4 HP in the mid to high rpm range, along with a general smoothing of the curve at high rpm (as jet kits usually do).

I then swapped the CV 165 jet out for a 160, which resulted in a similar feel but a very slight ping at WOT in 5th. Back to the 165. Fuel economy has not changed significantly.

The Bottom Line: I believe this Yost kit is worth the price, typically $50. The difference in power delivery and feel is noticeable, especially as the revs and gears climb higher. If one has a Mikuni, chances are his bike is already hopped up with all the usual goodies, and you would be very hard pressed to find a better performance enhancing product for $50 at that point.