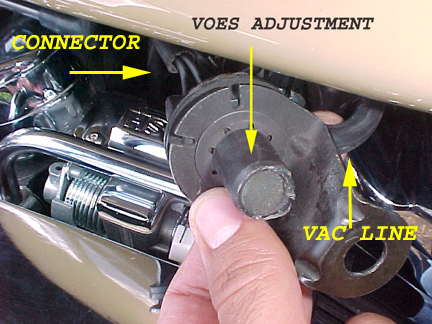 The purpose of this article is to help those who have built Stage II+ Sportster motors which ping badly under mild to moderate throttle, even after all of the usual suspects (lean carburation, over-advanced timing, low octane fuel, etc.) have been checked out and optimized. After a year of struggling with this same problem on my bike (when it was equipped with 9.8:1 S/E dual-plug heads and Dyna 2000i ignition,) I finally stumbled upon a solution which works in practice.

What is the VOES?: The VOES (for Vacuum Operated Electrical Switch) is the old style trigger for the stock HD “V-Fire III” ignition on all EVO BTs and non-Sport EVO Sportsters. (By contrast TC88s and the ’98+ Sportster Sport use the more advanced, superior “MAP Sensor” in place of the VOES). Essentially, this VOES switch has a small hose (“vac line” pictured above) connected between it and the carburator, from which it measures the level of intake vacuum. Based on this level, a signal is sent to the microprocessor in the ignition module, telling it to choose either of its two curves. The ignition module will choose a “retarded” or default curve for an  engine under hard load or WOT, or an “advanced” curve under light load / cruising.  The VOES signal on late model stock Sportster engines is set at approximately 4″ of mercury.

Why Should You Modify the VOES?: The stock VOES setting is just fine for stock or Stage I engines, as is. If your engine is under Stage II and pings, chances are the VOES is not the culprit. However, as you build the motor to Stage II and beyond, the effects of high compression inevitably come into play, and the motor becomes much more sensitive to over-advanced timing. The stock VOES setting switches to advanced curve too early for a high compression motor, and the result is pinging under light roll-ons, especially in high gears. The VOES is sensing light load and telling the ignition module to switch to advanced curve, which in effect is too advanced for the Stage II+ motor to handle. The idea here is to delay the VOES from switching to the advanced curve too early, effectively minimizing those dreaded partial-throttle pinging woes. Remember, this is step should be taken only after you are positive that the aforementioned usual suspects  have been checked out and optimized.

How Do You Modify the VOES? To do this, you will need a vacuum gauge and ohmmeter. Remove silicone plug (as shown above) to expose VOES adjustment screw. Plug hole with finger to prevent a vacuum leak, and apply increasing vacuum with vacuum gauge. Using the Ohmmeter, determine a baseline  where the switch sends the signal – as stated earlier, it should be about 4″ of mercury for a stock VOES. Remove your finger and adjust the screw – For a Stage II motor with around 10.5:1 of effective compression, try adjusting the screw (turning clockwise RAISES the In/Mercury level) until the VOES switches at about 5.5-6.5.” For reference, modern EVO FLTs switch around 5.5.” Repeat these steps until the VOES switches where you want it to

You want to have it switch at just the right time – too soon, and you will ping. Too late, and you will be stuck on the lazy curve too often, negatively affecting throttle response. It’s trial and error, and I’ve found that I can leave the VOES hanging out right near the top of the carb while I do test runs to make things easier. When you’re done adjusting, fill the adjustment screw hole back up with silicone and remount the VOES behind the carb where it came from. You’re done.

Kuryakyn Rainbow Strobe as seen at dusk - 7/99 Seeing and Being... read more