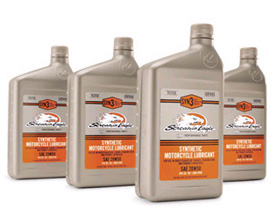 Background: After many years of myth promotion and fact obfuscation, Harley-Davidson finally introduced its own line of synthetic oil called “SYN-3” in early 2003. Upon reading the announcement in my Spring 2003 supplement, I noticed some interesting tidbits where Harley contradicts many of its earlier anti-synthetic assertions ad nauseum. The supplement boasts of the advantages of SYN-3 as if H-D has just reinvented the wheel. According to the supplement, “current levels of petrochemical technology” have allowed HD engineers a breakthrough, and the new oil supposedly offers increased levels of protection against wide temperature ranges, reduced friction, etc. etc. The same things all other synthetic manufacturers have been claiming for decades. The part of the advertising which irks me is where H-D claims it needed to create a new “performance standard” – dubbed the “Harley-Davidson Screamin’ Eagle Synthetic Motorcycle Lubricant Performance Standard” – by which to judge which synthetic oils are suitable. Naturally, only SYN-3 “meets” this “standard,” which of course isn’t specified. The brochure goes on to claim that SYN-3 “outperformed all other engine oils” in dynamometer tests, and outperforms “any petroleum-based lubricant.” Finally, the brochure refers people with questions to the “Parts Professionals” at the local dealership. The SYN-3 sells for just under $9 per quart, and can be used in both the engine and transmission.

A few comments: While I’m certainly not a petrochemical engineer, I am well versed in the art of marketing. Call me cynical, but until I see objective evidence regarding this product’s performance, I wouldn’t even consider buying “Harley’s” synthetic oil. The company has a history of marketing myth over objective fact, and no issue illustrates this more than oil. For years, in the face of all published independent tests, Harley insisted that only its overpriced petroleum-based oil was suitable for its V-Twin motors. The same marketing mill which for years advanced the cause that synthetic was somehow “bad” – as all objective evidence pointed the other way – is now trying to sell the same stuff it once insulted!

There has been no “technological breakthrough.” Synthetic oil has been around for decades, and Harley has finally come to the brilliant conclusion that its customers were being turned onto it due to its painfully obvious functional benefits, and the fact that it typically sells for less than Harley’s inferior petroleum-based “360” product.

There was no need to create a “new” performance standard – this is a blatant marketing move designed to avoid direct comparison between SYN-3 and all of the other established synthetic oils on the market.

That this stuff can be used in both the engine and trans “to avoid confusion or accidentally topping off with the wrong fluid” speaks volumes about just how intelligent HD thinks its average customer is. I don’t get confused that easily, and this supposed “benefit” speaks more to the fact that the viscosities in HD engines and transmissions are close enough to use the same fluid – something which, again, has been done for years already.

There is little credibility in asking a Harley “Parts Professional” – the same exact guys who swore that synthetic oil caused “bearing skate” (while never producing any proof of such a problem) – for advice on why I should now buy Harley oil.

And finally, there is no way I’m paying $9 per quart for SYN-3, which is simply some major $4 per quart brand re-badged and sold at double the price to anyone gullible enough to buy it.

Now, inevitably, newbies will come along unaware of the history, and will buy this overpriced, overmarketed oil – and I find no fault in them for it beyond an inability to gauge value. But to me, anybody who has been around this scene long enough to see the oil thread rear its ugly head, and buys synthetic only now that the H-D marketing machine has granted its permission, has the critical thinking skills of a retarded knat which has just inhaled PCP.

Bottom Line: Until I see objective proof of this product’s performance, I would not consider buying it. But at least now the debate is over – the last stalwart of pro-petroleum marketing has just fallen.

UPDATE: The May 2003 American Iron Article: Some have encouraged me to go back to the American Iron press releas… err, I mean article on SYN-3 in the May issue, so I did. I noticed that Harley has somehow managed to contradict itself three times in one magazine. To wit–

May AIM Page 24 (Letters to the Editor): “I’m the service manager for a H-D dealership [My Note: this is the dealer which presumably fixed AIM columnist Stephanie Feld’s bike when it had an engine failure]. After talking to Stephanie and looking over the motor, we found the cause of her problem. Stephanie used Amsoil in her motor, which is synthetic oil. Because this oil reduces friction so well, it causes the roller bearings to skid across the surface, instead of rolling. …(Snip commercial for HD petro oil)…. So, for all you synthetic oil fans, beware!”

May AIM Page 31 (SYN-3 Article): When asked about “bearing skate,” H-D’s official response was that there is “NO RECORD of that EVER happening in one of its engines” and goes on to say that “H-D has
NEVER CHECKED how other synthetics affected a H-D engine.” (Go back and read that over until it sinks in).

Hmmm… No record of bearing skate at H-D… Back to my SYN-3 literature!

SYN-3 Brochure Direct Quote: “A common concern with other available synthetic oils is that roller bearings may “skate” or “float” in the bearing race, and may not actually rotate as designed.”

I hope that clears it up for you – it’s certainly enough for me!

News Flash 5/2/03: Golden Spectro announced the addition of “V-SYN-3” on its website http://www.spectro-oils.com/new_products.htm – Now that we know that Harley’s SYN-3 is merely rebadged oil sold at a premium, anyone who wants to buy it can simply go directly to Golden Spectro, and avoid paying extra for the useless Harley label on the bottle.