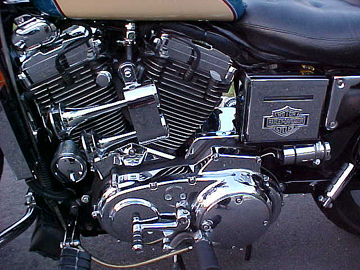 Background: I decided to try out a purpose-made air horn assembly, to test whether it was a worthwhile accessory for my highway commute, where heavy traffic is sometimes an unfortunate reality. I did an online search for air horns for H-D applications, and chose the Rivco unit above the others I found because it seemed like the most complete dual-trumpet package – I was insistent on dual-trumpets, because I’d heard single trumpet units before and didn’t care for the tone of those horns. The Rivco product was delivered within days of my order, and I proceeded with the installation.

Quality: Average. The chrome finish is OK, but the bracket which holds the trumpets in place looks and feels flimsy, especially when looking at it from the backside (reed side) of the trumpets. Enclosing the open end of the bracket would do wonders to make the whole assembly look and feel more substantial. The optional chrome cover for the compressor is also of average quality, as are the trumpet end caps which mount using unfinished clips. 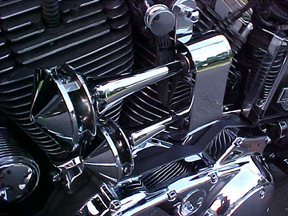 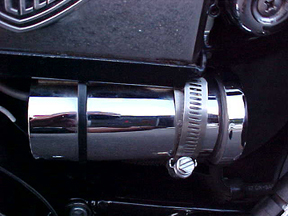 Mounting & Installation: Well, let’s just say that if you have a Sportster, it isn’t the “UNDER 20 MINUTES!!” promised on the box the horn arrived in. There are two main parts of this assembly: the dual-trumpet horns and the compressor. The horns mount in the stock “cowbell” horn position. Problem #1 was encountered here, as the chrome washer which goes between the trumpet horn bracket and the stock rubber horn-mount grommet was much too thick, preventing the stock nut from grabbing the stock horn mounting stud when mounting the trumpet assembly. Rather than replace the stud, I took Rivco’s supplied chrome washer down to the local bike shop, where it was milled down by half. Now I could mount easily, using my stock chrome acorn nut and lock-washer (with liberal amounts of Loc-Tite). Problem solved. I should note here that the trumpet assembly is quite top heavy, and is only secured in that one (stock) mounting location spot. In the almost 4,000 miles and three months of testing which preceded this report, the trumpet assembly never moved, so there were no actual issues – but the final assembly still leaves you with a feeling that this isn’t the most robust mounting method.

The compressor was next. We all know extra space is hard to find on a Sportster, so I knew this would be a challenge. The most obvious mounting location is right in between the front frame’s two downtubes – I have seen compressors mounted there before on XLs. But on my bike, the engine guard and the chrome voltage regulator cover ate up enough of that small space between the downtubes so as to prevent the compressor from fitting there. In looking around the bike, I decided to use the space available under the battery tray. The compressor comes with one aeroseal to mount, so I widened the existing slot on the right side of the battery tray with a Demel tool, just wide enough to fit the aeroseal. Then, I drilled a hole on the left side of the tray, so I could add a tie-wrap for added support. Finally, I added a strip of rubber between the compressor and the battery tray, to avoid metal to metal contact and scuffing. All worked fine, though now I need to loosen the aeroseal to gain access to the 7/16″ nut which holds the battery strap tight – a very minor inconvenience. Overall, any effort placed here is not the fault of the manufacturer, but instead is an inherent part of owning a motorcycle with limited spare space. There is one gripe, though: The compressor’s optional chrome cover could have been slotted to allow the aeroseal to go inside, rather than completely outside the cover. This would give the product a much more finished appearance – who wants to have a big, ugly aeroseal in plainly obvious sight?

Finally, we have the wiring and associated routing of the air hose. The wiring basically involves plugging the existing power leads for the stock horn into a relay, and then plugging the leads from the compressor into the same relay. The instructions tell you to tie-wrap the black relay box to the backside of trumpet assembly, which is not the most appealing location in terms of aesthetics. Also, given how much the trumpet assembly vibrates at idle, I didn’t want the wiring attached to that location. Rather, I elected to extend the stock horn power leads, and ran all leads up under the seat, where I mounted the relay to the frame with some tie wraps. I sealed all electrical connections with my own shrink-tubing and some dielectric grease, to prevent corrosion in the long term. This took more time, sure, but this is really the right way to do it on this type of bike. The included air-hose was nicely packaged in a protective black mesh, and was easy to run with the stock wiring harness from the compressor to the horn. I secured all air-hose connection points with my own tie-wraps, just for added measure.

Performance: This is one area where there are no complaints. The horn assembly works exactly as advertised, delivering an extremely powerful, ear-piercing blast. In fact, on the highway, it’s quite fun to watch the mindless cell-phone blabbers who wander into your lane or push you off the road go into “emergency swerve” mode at the sound of this horn, which sounds very much like a semi-truck’s. Given that the decibel scale is not linear, I do believe Rivco’s claim of this horn being four times louder than stock (~87 dB) – in the 128 dB range. It really is something else! As part of the test, I also drove with the horn in horrendous downpours for long periods of time, and it kept working fine. A tip for wet weather riding – remember to mount the trumpets facing slightly downward, so water doesn’t puddle in the reeds!

Bottom Line: After using this horn, I can say that having a louder horn is especially useful for commuter / heavy traffic applications, given the dismal rate of awareness of the cagers around you. However, this particular product is not flawless – in addition to the niggling installation issues raised above, the design with regards to horn maintenance is also lacking. Rather than have removable end caps so as to allow easy access to the reeds (for cleaning), you must physically disconnect the horn and squirt WD-40 into the air-hose, and then blow that out with the compressor. Again, this is a design flaw which could make the product that much better if addressed.

As I was testing this product, a similar dual-trumpet design came out from a company called Howard’s Horns. The Howard’s Horns unit does have removable end caps for easy access to the reeds, and has a different mounting process which may or may not be better for the Sportster (no direct comparison available because I haven’t seen one in person). Also, if the performance is all that matters and you can live without chrome, you can pick up a bargain air-horn assembly (with compressor) from JC Whitney or other auto-parts warehouse for about $60.00, which will essentially do the same thing as the fancy chrome units do.