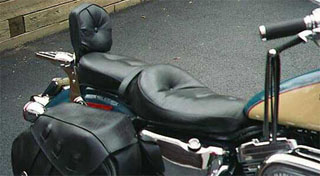 I’ve had 4 different seats since I bought the bike: The stock POS (lasted a week), the HD Bar & Shield solo saddle (not horrible), the HD Deluxe Touring Seat (TOTAL POS), and my new Mustang Wide Regal Sport Touring Seat (incredible). I finally bit the bullet and bought the Mustang because I just couldn’t take the dismal comfort of HD seats anymore, and Mustang was very highly recommended to me by long distance riders on the list.

Let’s cut to the chase – Comparing the HD seats I tried to the Mustang in ANY terms (including value for the money, even though HD seats cost 1/2 of a Mustang) is frankly ridiculous. It’s like comparing a crappy old Ford Pinto to a brand new BMW. Harley seats are absolutely awful in terms of long range comfort, due to their plastic base pans (which sag after a short time) and soft foam (which adds to the effect). They feel OK for the first 5 minutes, but it’s all downhill from there. With my old HD Deluxe Touring Seat, I could actually feel the frame rails under the seat after an hour! I would imagine the only thing worse on your ass than an HD seat is being anally violated against your will!! So, if you can swing the money, buy a Mustang. If you can’t swing the money, wait until you can, and then buy the Mustang! DO NOT WASTE MONEY ON HD SEATS!!

My “Wide Regal” model seat is extremely wide and looks somewhat out of place on the sleek, skinny Sportster. Also, it doesn’t “hug” the frame the way the HD  Deluxe Touring Seat does, leading to a relatively high-profile type of look. But I’ve spent 14 hours straight in that seat with no problem. Its base pan is solid steel, and you get super support for as long as you sit on it. Believe me, after a long day on the scoot, style means nothing compared to comfort and function. Quality wise, the Mustang is built like a tank, with metal rivets (instead of the HD seat’s cheap staples) holding the surface material on, and rugged construction throughout. It’s a heavy, quality piece, and you do get what you pay for in this case. Simply put, there is no comparison… 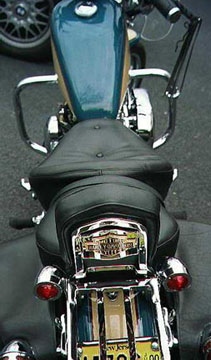